A syndicate of six owners that are based in Western Australia, got into the winner’s circle at Gawler greyhounds on Tuesday.

Crimson Sally ran a good 23.00 secs in winning, and is trained by Don Turner at Lewiston, for the Cape Fear syndicate. Syndicate Manager, Stuart Neilson was at the track to enjoy the win, which was pleasing as he does not always get that opportunity. Although a resident of SA, Stuart is based in the Pilbara region of WA, where he is employed as a driver of those huge ore trains. Stuart has been an owner since 1990, and has known Don Turner for a long time. Stuart formed the syndicate with five fellow train drivers, and then purchased three ready to race greyhounds, including Crimson Sally, from Victoria.

Today’s win was Crimson Sally’s third from her seventh start since coming to SA, and comes on top of a three month spell, due to a muscle injury. Although they can’t get to the track because of their remoteness, the syndicate all enjoy the opportunity to socialise in front of the screen and have a punt together. Join us at the Gawler track any Tuesday afternoon or Sunday evening, for great racing and food. 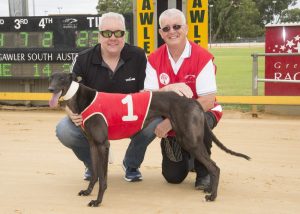