Two long standing friends enjoyed a win with their greyhound at Gawler on Tuesday. Racing in the second maiden event over the 400m trip, their runner, Stunning Jiggy jumped well from box 1 to go straight to the front, from So Si Bonne (5) and Aston Malena (3). However after a short distance, So Si Bonne took over the lead, before Stunning Jiggy asserted itself on the rails, and hit the front again. Stunning Jiggy was not headed again and went on to win comfortably by 4 lengths in 23.33 secs, from the Calomba based pair of So Si Bonne trained by Paul Fagan, and Aston Malena third for Leanne Fagan.

The winner is trained at Lewiston by Ben Rawlings, for the Jiggy Wells syndicate, which consists of Don Wells and Dwayne Jiggins, and his sons Luke, Rory and Sean. Don and Dwayne have been friends from school days, and originally owned and raced harness horses. However they decided to give that away and after a few years on the sidelines, Dwayne suggested they get into the greyhound industry. So two years ago they took their first step and purchased a ready to race greyhound at Bendigo. That purchase was Top Sprite, which chalked up 10 wins in Victoria and SA. That success was enough to get them really interested, and now they have an emphasis on mainly buying pups.

They were recommended to look at a particular litter of pups, and liking what they saw, they ended up purchasing three, which included Stunning Jiggy. They are quite pleased with the outcome, as this is her first win from just her second start, and the other two pups are about to hit the track. Dwayne commented that his sons, who could not be present, would be “tickled pink” with the result.

With some 50 wins across the country now under their belt, they are really enjoying things. Don said he really enjoyed the sport, as it is affordable and a big thrill to see the pups grow to maturity. Dwayne likes the aspect of being able to get close to the dogs and them being able to easily handle, and is contemplating entering the training ranks at a later stage.

Over the Christmas period, racing will be at Gawler every Tuesday afternoon and Sunday evening, including Christmas Eve (day), Boxing Day (day) and New Years’ Eve (night). This will provide a fantastic opportunity to enjoy great racing and a great meal. 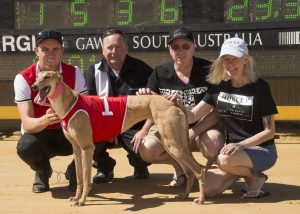