NEVER TOO FAR AWAY

NEVER TOO FAR AWAY

A greyhound that has been around the mark throughout its career, without winning a lot, rewarded its owners with a solid win at Gawler on Tuesday.

Jumping from box 1 in a 400m Grade 6 event, Sweet Jaz got to the front but Emerley Again (4) on the outside, took over the running. Emerley Again pushed the margin out to two lengths, with Sweet Jaz on the rails and Zipping Kim (8) joining in on the outside. It was only as the greyhounds entered the home straight that Sweet Jaz took the lead again, going on to win by three lengths in the time of 23.04 secs. Zipping Kim finished second for Kim Johnstone of Two Wells, and the early leader Emerley Again ran third for Judi Hurley, also of Two Wells.

Trained at Evanston by Simon Gesler, Sweet Jaz is owned by Tina Cattermole and Garry Harradine (NSW). Simon explained that Sweet Jaz has never been too far away in its races, but always seems to run into something that bit better. The key to her success is when she can jump well, which she was able to do with this run. While the win had been a bit of a surprise to Simon, he did explain that she seems to perform better over the 400m, after a hit out over 500m distance, which she had the run before.

Tina’s partner, Peter Smith, said that Sweet Jaz had been placed with Simon, after Tina and Peter had decided to concentrate on breeding and rearing pups. That fits in well with Simon, who enjoys working with his four greyhounds, and always gets a buzz when they get up. 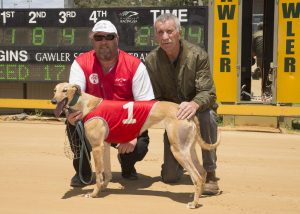