GREG GETS AN EARLY CHRISTMAS PRESENT

Greg gets an early Christmas present

Sunday the 24th December saw the running of the 2017 Golden Maiden Final over 531m. The $5000 race is hotly contested with numbers of trainers nominating their greyhounds for the heats.

Greg Board who trains just outside of Murray Bridge had two in the final with Spring Wine taking the honours Spring Wine in a time of 31.62 seconds followed by Tal Lee trained by local Boz Stamenkovic and finishing off the placing was Unpossible trained by Petar Jovanovic.

Greg has taken a couple of weeks away to be with family in NSW and had long time friend and handler Garry Lawford come across to look after his greyhounds while away. Garry said that he had been helping Greg handle his greyhounds for the past 15years while Greg was training in NSW and was pleased to be helping out again with this win.

Greg came across to SA in April of this year and has had great success with nearly 40 wins here in that time and has been a great supporter of the SA Greyhound industry since joining. Greg also has a number of greyhounds running up in Qld around the Toowoomba region with another trainer who has been having a great deal of success also. 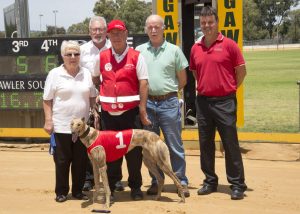