SPRING IN THE AIR

SPRING IN THE AIR

Trainer Greg Board enjoyed success at Gawler greyhounds on Tuesday with two littermates both winning their second races.

Greg’s first winner was Spring Lottie (1), which had been camped on the rails behind Aston Amo (5) until they entered the straight. Spring Lottie was able to hit the front, and in a tightly fought run to the line, won by a neck. Second was the initial leader Aston Amo, trained by June Sharpe of Paralowie, with Afterglow (2) less than a length further back for John Mundy of Lewiston.

In the next event also over the 400m journey, Spring Lemon (6) was able to take the lead early from El Serena (1), to win in good fashion by 3 lengths. El Serena was second for David Perry of Lewiston, while Sutton Lewis (4) finished a further length away for Angela Modra of Gawler River.

As well as being trained by Greg, both greyhounds are also owned by him, and they are from the Barcia Bale x Spring Charlotte litter, also bred by the Board family. Another member of the litter, Spring Noaky, also raced on the day, but ran second, making it a great day out for the litter and Greg.

These wins capped off a good period for Greg, as he was successful in the Strathalbyn Cup with Spring Bloom, just two days prior. Greg, who originally hails from NSW, was thrilled to win the Cup, his first major result since moving to SA 12 months ago. Starting out with just one greyhound, Greg had some initial success and was hooked from there on. After building up to a large property at Spring Hill in NSW, he decided to move to SA with his wife Helen, to scale down and enjoy a more casual lifestyle here.

That has worked out fine, with Greg having a smaller team. They are both enjoying their move SA, winning their share of races, and also having some time to relax. They have appreciated the assistance they have received, which has allowed them to feel part of the local scene.

Racing is on again at Gawler this week on our normal schedule of Tuesday afternoon, and Sunday evening. Join us for great racing while enjoying a meal. 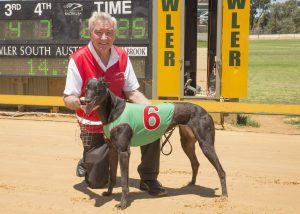