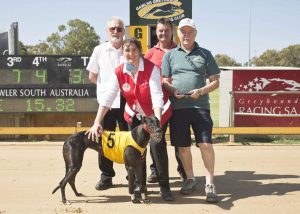 The Final of the richest race in SA for Maiden greyhounds, the Golden Maiden Series, was run at Gawler last week.

With the Heats conducted the previous week, the finalists lined up for the Final, over the 531m journey. Jumping from box 7, Air Marshall took the lead to open up a two length gap over My Little Felix (5), followed by Another Clanger (4) close at hand. Around the back turn, My Little Felix stuck to her task and gradually picked up Air Marshall, going to the front as they turned into the straight, winning by 2½ lengths in the time of 31.31secs. The fast finishing No Surrender (1) ran on strongly to take out second placing for Nicole Price of Renmark, relegating Air Marshall to third, for Ray Murray of Reeves Plains.

Trained by Bosko Stamenkovic at Two Wells, My Little Felix is owned with partner Christine Costa. My Little Felix is the first to win in the litter that was also bred by Bosko and Christine, and is named after Olympic and International sprinter Allyson Felix, a prolific winner of Gold Medals on the world stage. They had bred a previous winner of the Golden Maiden Final, but this was the first time they had won with their own greyhound. Christine confided that she hadn’t cheered so much for a win in the last four years, and was thrilled with the result.

Christine believes in life cycle management of their dogs, where they breed two litters every two years, then educate and race them, following them through the adoption phase. Christine is an active and proud fosterer of their dogs, and has built up a network of people who have been happy to adopt a greyhound, and meet socially in groups.

They have faith in their own dogs, and have recently taken the step to significantly invest in a new kennel complex. Bosko and Christine made the move to SA from NSW nearly twenty years ago and have achieved success with their team effort. In addition to her fostering work, Christine puts back into the sport as a member of the Industry Consultative Group, a panel that provides advice to Greyhound Racing SA.

With the State enduring hot weather, there have been many alterations to the normal racing schedule, including a cancellation and a change to days and times. Please check for any alterations to our normal Tuesday and Friday afternoon schedule.