WORTH A SECOND LOOK 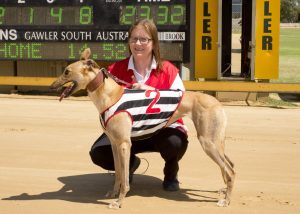 WORTH A SECOND LOOK

A greyhound making her second appearance at the Gawler circuit, improved on her first run there, to score a good win this time around.

In the Grade 6 event over the 400m journey, Baby Brooke shot out of box 2 to take an early three length break over Sutton Daisy (4) and Just Madge (1). Fancied runner Just Madge started to bridge the gap as they passed the 643m boxes, and rounding the final turn, it looked a chance to pick up the leader, but was unable to. Baby Brooke was travelling well and withheld the challenge, winning by ¾ length in 23.32 secs. Just Madge claimed second placing for Steven Brook of Lewiston, with Sutton Daisy finishing third for Angela Modra of Gawler River.

Baby Brooke is owned and trained by Allen Miegel at Mypolonga, and was cared for on the day by his wife Karen. Brooke was bred by Noel and Kellie Watson of Murrayville in Victoria, who considered that Brooke wasn’t as talented as her littermates, and probably wasn’t going to race. Allen became aware of this and decided to give the fawn female a chance on the track, consequently purchasing her. Today’s win was Brooke’s second, and together with five placings from 14 starts, she has provided plenty of interest for the Miegels. Karen said that the shorter straight at the Gawler track suits her style of racing, compared to the longer one at their home track at Murray Bridge, where she can get run down.

Karen said that Brooke’s future schedule will include racing at Angle Park, which also features the shorter straights. Allen and Karen have only a small racing team, plus some pups, and as such they treat the sport as a hobby which they thoroughly enjoyed over many years.

Whyalla trainer Yvonne Maxwell was the only trainer to land a double for the day, with Bella Peruzzi and Peruzzi Boloney winning. They are both members of the multi winning Premier Boloney by Peruzzi litter that Yvonne bred, with just these two having won 15 races between them, and many successes from the other littermates.

Racing at Gawler is scheduled for Friday and Tuesday afternoons, but with the hot weather, race times and sometimes days, may be subject to change.