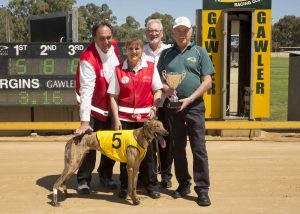 The Mick Giniotis trained Victa Caleb showed it’s versatility when he won two races at Gawler greyhounds in the one week, over the 400m and 531m journeys.

The first win came at the Tuesday meeting, in the 2019 Anniversary Cup over the 531m trip. Drawn in box 5, Victa Caleb went straight to the front, and after the field settled, Fantastic Bronx (7) and Panhandle Slim (8) gave pursuit. Victa Caleb was able to maintain a comfortable break of two lengths over his rivals, to win by 1 ½ lengths in a good time of 30.76 secs. Panhandle Slim ran on well into second spot for Ray Murray of Reeves Plains, and Spirit Of Pop (6) made up a lot of ground after being initially at the tail of the field, to finish third for Angela Modra of Gawler River.

Victa Caleb then reappeared at the following Friday meeting, this time over the 400m distance. Drawn again in box 5, Victa Caleb was once more able to jump to the lead, but this time had to contend with continued opposition. Providing that challenge was Winsome Money (6), which was able to go stride for stride with Victa Caleb, and at one stage hit the front by almost a length. However Victa Caleb was able to claw that back, and regained the ascendancy in the home straight, to win by 1 ½ lengths again. Second was Winsome Money (8), trained by Steven Coates of Parafield Gardens, with Spring Sniper third, also for Mick Giniotis. For those interested in numbers, Victa Caleb won both times from box 5 in race 8, with the other two placegetters being 6 and 8.

Victa Caleb is trained at Two Wells by Mick for the Schadow Racing syndicate, managed by Mike’s partner, Julie Gray. The syndicate also contains Ron and Joan Schadow, who bred the litter and Mike and Julie’s son Kyle. Victa Caleb took his winning tally to 4 consecutive wins, and has an excellent record of 30 wins and 21 placings from a career of 63 starts. He has a fantastic record over the 531m distance at Gawler, never being unplaced in 13 starts there, with 7 wins and 6 placings. The 400m trip has yielded 5 wins, and 4 placings from 10 starts, missing a place just once.

The association of Ron and Mick started several years ago when Mick was looking for a couple of ready to race youngsters to add to his team. Ron and Joan Schadow, who are based at Victor Harbor, suddenly found they had too many of the same age and were open to placing them elsewhere. As fortune would have it, it was the start of a long and relationship, with Mick this year training 74 winners and 92 placings the majority being the “Victa” dogs. Ron’s daughter Sue, said on Tuesday that “Dad would having been shouting from his couch” at the win. He must have been even more elated after Friday’s win.

Victa Caleb will now contest the Sprint Final, to be run as a support race at the big Gawler Gold Cup meeting this Sunday 3rd November. It is the premier night in our racing calendar, with great racing and atmosphere, so please join us.