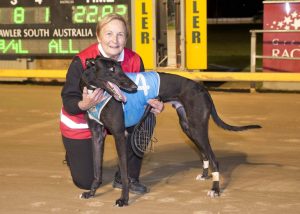 In an unusual occurrence, three members of the Johnstone family all trained a separate winner from littermates at Gawler greyhounds on Friday afternoon.

The first winner was in race 3, a Grade 6 event over the 400m trip which saw Nancy Lee from box 7, lead all the way to win by the convincing margin of nearly six lengths, in a fast time of 22.91 secs. Second was Spicey Jill for Tim Richards of Meningie, and So Foxy was third for Bob Isaacson of Lewiston.

In race 9, also a Grade 6 over 400m, the Johnstone runner was Cuddles Lee, starting from box 2. Cuddles Lee was running in second place for most of the race, but finished with a well timed run to overtake the leader Diamond Lee as they neared the line, to win by the narrow margin of a head. Diamond Lee was second for Angela Modra of Gawler River, and Abigarrado ran third for Vadim Roz of Moppa.

The final winner came in race 11, a Grade 5 400m event, where their runner, Resolute Lee, was able to sit in behind early pacemaker Dawn To Dusk, and then take the lead as they headed into the straight. Resolute Lee scored a sound win with the margin being 2 ½ lengths, from Dawn To Dusk, trained by Ben Rawlings of Lewiston, with Jervois Boy third for Tim Richards.

Of the three winners, Resolute Lee is currently the most successful, having chalked up nine wins and ten placings from 28 starts, and has won his last four races on the trot, all at Gawler and over the 400m and 531m distances.

Darrell and Kathy have been involved in the sport from its earliest days in SA, and with Darrell’s late father Brian starting the involvement, Kim is the third generation to be a trainer.