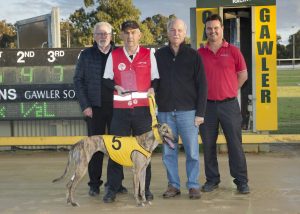 At Gawler greyhounds on Friday, the feature race was the 2019 Gawler Breeders’ Final, which was part of a series of events for SA bred greyhounds, whelped in the first six months of 2017.

In the 531m event, and heading out of the straight the first time, Bailey Rocks from box 5 showed the way, to lead from Emerley Fabbro (1) and Allinga Jess (4). Around the first turn, Bailey Rocks was able to cross to the rails, and open up a handy five length break on the opposition, headed by Allinga Jess. The field was unable to gain any ground on the leader, with Bailey Rocks going on to win comfortably by 4 lengths in the time of 31.00 secs. Littermates Allinga Jess and Allinga Mal (7), finished second and third respectively, for Yvonne King of Langhorne Creek.

Bailey Rocks is prepared by Alberton trainer Bill Wudarczyk, who races her in partnership with Kirin Corby. Bill said he wasn’t that confident before the race, as Bailey Rocks needs to lead, as she can find trouble if caught back on the rails. But today’s win exceeded Bill’s expectations, taking her tally to 7 wins and 6 placings from 24 starts.

Bailey Rocks is a member of a great litter that Bill whelped from Rhonda Rocks, a breeding female that he leased for one litter of pups. As part of the deal, Bill and Kirin received five pups, and all have been winners. The best performed of the litter, Sennachie, has put SA racing firmly on the map and is the toast of Australian racing, having recently won two Group 1 races, the Brisbane Cup and on Saturday, the Maturity Classic in Melbourne. Sennachie has now won 14 races, with 5 placings from just 22 starts, for $488,000 in stakemoney. The mother Rhonda Rocks only had two starts with one good win, but as the trainer, Bill saw enough to convince him to pursue the chance to breed a litter.

Bill started his racing interest “not too seriously” way back in 1971, but took it to a higher level after he retired in 2001. Greyhound racing provides great enjoyment for Bill, as he likes the greyhounds themselves, the social aspects, as well as the exercise and routine. Bill said that “to get a good dog is a blessing”, but to be involved with the best litter he has had, must be exceptional.