After the recent heat which had caused a meeting to be cancelled, it was a pleasure to have a cooler day at Gawler greyhounds on Friday.

The first event on the program was a Maiden over the 400m trip, which saw box 1 greyhound Iroquois Lad jump straight to the front, from Jeepers (2). Jeepers continually challenged Iroquois Lad, keeping up the pressure by running on the outside of the leader. Iroquois lad couldn’t break away at any stage, and as they entered the home straight, Jeepers hit the front by switching to a rails run. However Iroquois Lad rallied again and regained the lead just when it mattered, winning by a nose. Jeepers had battled on well in only its second race start to run second for Roger Harris of Port Pirie, while Space Runner (3) finished third for Vadim Roz of Two Wells.

Iroquoi s Lad is trained at Owen by Gary Pidgeon, and is raced in partnership with his wife Michaela. The white and black greyhound has had five previous starts , never finishing further back than fourth spot, so he was always going to be in the picture, and was rewarded for his consistency.

Reeves Plains trainer, Ray Murray was the only multiple winner on the day, scoring a double with Why That in the Grade 5 531m race, and in the final race, an event for Open class greyhounds over 400m, Ray’s winner was Steel. Starting from box 4, Steel was able to lead for the whole journey, running 22.79 secs, the best time for the day over the 400m. Ray’s son, Troy, also landed a good win with Just Love, which was handled on the day by Troy’s son Connor, making it a three generation combination. 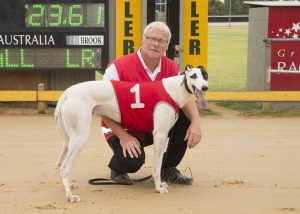