An owner from over the border, and who was previously involved with thoroughbreds, scored a win at Gawler greyhounds on Tuesday.

In the Mixed 4/5 Grade race, Just Love jumping from box 6, crossed to the front at the winning post the first time round, to lead from Glory Fire (2) and Revel (8). Just Love opened a sizeable break on the rest of the field, and never looked in doubt, going on to win by 4¼ lengths. Lucy Stardust (1) ran on well into second place for Liz Harley of Lewiston, with Revel in a whisker away in third spot for Scott Feltus also of Lewiston.

Just Love is trained by Troy Murray at Lewiston for Billy Stockdale from Victoria. The white and black dog had got off to a great racing start in Victoria, winning his first two race starts at Sale. After another win and running many placings in Victoria, Billy decided there might be greater opportunities in SA. With Troy having trained previously for his cousin, it seemed to be a good place to try. The dog arrived in SA in July and has since chalked up 5 wins here, including the last two in succession, which has taken his career tally to eight wins and nine placings from 27 starts.

Billy reported that he and his family have been involved for a long time in the thoroughbred racing industry, as trainers and jockeys, but he has decided to transition to greyhounds, along with some other family members. Just Love was Billy’s first venture into greyhound racing and he named the dog after a horse that his father had trained. Billy has become involved with greyhounds as he finds it a lot less physically demanding than handling thoroughbreds, and as a mark of his commitment has recently taken out a trainer’s licence himself. It is still early days, but Billy is really enjoying the switch to greyhounds.

The win of Just Love completed a race to race double for Troy, as he won the previous event with Premier Double, and continues a good recent run for Troy at Gawler. 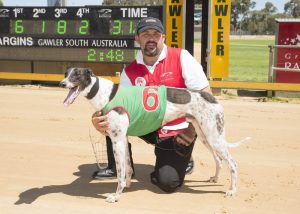