VICTA FOR THE DAY

VICTA FOR THE DAY

Two Wells trainer Michael Giniotis had a great day out at Gawler on Tuesday, arriving with three greyhounds and leaving with all three winning, and all raced in the same interests.

Michael’s first winner came in race 2, a Maiden event over 400m, when Victa Kylie from box 1 jumped straight to the front, and lead all the way for a four length win over Usain Beast (8) for Ben Rawlings and Pretoria Son (3) for Les Bates.

Victa Suzie, a littermate to Victa Kylie, emulated her run in race 4, also over 400m, by leading all the way from box 5, winning by three lengths over Mister Okay (6) for Don Turner and Emerley Jose (8) for Judi Hurley. Victa Suzie ran a more than handy 22.83 secs.

The third winner came in race 7, a Grade 4/5 over the 400m journey. Victa Matt was headed at the start but quickly hit his straps to get to the front, never being headed from then on and running the best time of the trio of 22.75 secs, with a margin of three lengths. Second was Casino (8) for Rebecca McAuley-Fry and third was Allen Punter (7) for Lisa Rasmussen.

All three winners are trained by Michael for Ron and Joan Schadow of Victor Harbor, who race their greyhounds with the “Victa” prefix. Michael had been down to just one greyhound in his kennels and was looking for some extras. He approached Ron, who was on the lookout for a trainer for four older greyhounds, which included Victa Matt. It fitted in well with both, and when Ron had then whelped two litters of nine pups in a close time, Michael took one of those litters. This litter, which included Victa Kylie and Victa Suzie, has now had three individual winners, with the other littermates yet to race. The other litter went to Lewiston trainer Robyn Mackellar, and includes the very well performed Victor Louise.

Michael said that the runners to date from this litter are always keen to get to the track, and have all shown good box manners. Michael really enjoys working with the dogs and reckons they are “super personalities”, each with their own character. He finds it a great hobby, which keeps him active and involved, but he is only able to do it well because his wife Julie provides such active support. To top it off, he is getting great pleasure from seeing the smiles on Ron and Joanne’s faces from seeing their dogs win.

If you are looking to experience great racing action, then join us at Gawler any Sunday night or Tuesday afternoon, and enjoy a meal in our facility, overlooking the track. 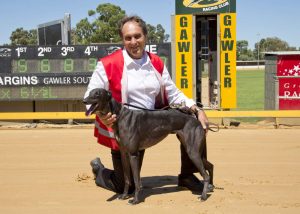