Having to travel up to 5 hours to get to the Gawler greyhound track would deter many people, but there are a handful of trainers that have to do that just to be able to race.

One such long term visitor to Gawler is Chris Jaensch, who travels from Curlwaa in NSW, just over the border from Mildura. In the second Maiden event of the day over the 400m journey, Chris had Glitch Gambler from box 6, engaged. Best away was Spring Festival from box 1, but was quickly headed by Glitch Gambler. Victa Suzie (7) out made a run wider and went to the front, but entering the home straight, Glitch Gambler got the upper hand again and went on to win by a length. Victa Suzie finished in second spot for Robyn Mackellar of Lewiston, and Woodside Hussler (8) was third for Graham Smith from Woodside.

Glitch Gambler was handled on the day by the owner, Chris’ son, Michael. Normally based in Adelaide, Michael was holidaying with his parents and made the trip down. Glitch Gambler was one of two greyhounds from the same locally bred litter that made the trip, with the other runner, Super Sting, finishing third in the prior race. At the moment, Chris has only three dogs in work, plus some pups.

When you have to travel so far to trial and race, you have to enjoy what you are doing. In Chris and Michael’s case, it is the thrill of racing, and perhaps a win at the end is a bonus. With a win to Glitch Gambler and a promising run from first start runner Super Sting, that certainly helps to maintain the enthusiasm.

Seaton trainer Benjamin Lowick landed the longest priced winner for the day, when Justice Elite took out the first Maiden event at the starting price of $41. Jumping from box 7, Justice Elite was in the leading pair for all of the race, running on strongly at the business end to win by nearly a length from the well fancied Victa Cazza.

Racing is at Gawler every Sunday evening and Tuesday afternoon, so enjoy close up racing and a great meal in our facility. 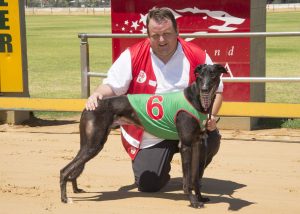